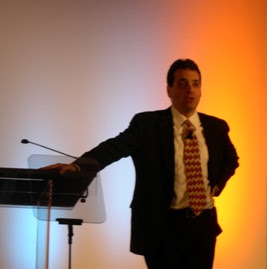 Daniel Pink was the keynote speaker at this years TIES Technology Conference. Creative Minds Collaborating for a Web 3.0 World is the title of this year's conference. I had heard Pink speak at the University of Minnesota last spring in a conversational setting, and was interested to hear a more direct message and whether he had any new things to share.
He started by talking about "What makes a Good Speech?"

He said the repitition comes from a teacher he had 30 years ago, Mrs. Path, who said, "Repetition is an effective form of emphasis!" She told him over, and over and over!

His focus today was on education and the economy. While not an educational expert, he said that his ability to focus on systems gives him .
The purpose of education in America is not to deliver employees to buisiness, it's about helping kids reach their potential, civic responsibility, and well informed citizens.
We must win that argument if we want to do well by our kids.
We need to prepare kids for their future, not our past.-Similar to John Dewey in the 1930's and 1940's.
He then discussed some of the concepts from his book, "A Whole New Mind."
He talked about growing up in the late part of the 20th century in the middle class, where if you were good at math, you went into medicine or engineering, if you were good at language arts, you became a lawyer.
This does not define our kids future.
This is not wishful thinking, it's actually that the scales are tilting toward the following:

The big questions that need to be answered today are:

Can someone oversees do it cheaper, can computers do it faster, is what you're delivering in demand in an age of abundance.
What about STEM? This is not a brief against STEM, just a critical analysis of how STEM has been done in the past by having kids spit back results.
Google is trying to hire "Non-Routine Savants". Medical Schools are now using art to teach decision making. Extrordinary observation skills are required to become a good painter, and a good doctor! Yet the first thing to go in elementary and secondary schools is art education!

The 6 Abilities that Matter Most Right Now-They are hard to outsource and hard to automate, and they make us human!


He is making his presentation available, and suggested that people to Tweet him!