We Have Met the Enemy and He is PowerPoint! A Reflection 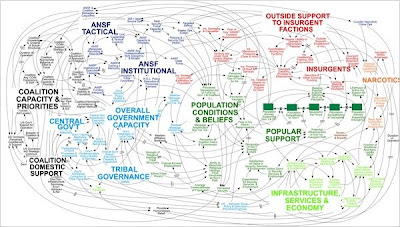 Today, the New York Times ran an interesting article regarding the use of PowerPoint in the military, We Have Met the Enemy and He is PowerPoint. It was a fairly damning critique of an organization that gets most of its information or lack of information through PowerPoint slides.
Here are a few quotes from the article:
“PowerPoint makes us stupid" - Gen. James N. Matti
“It’s dangerous because it can create the illusion of understanding and the illusion of control...Some problems in the world are not bullet-izable.” -Gen. H.R. McMaster
And the following comment that I think has a great impact for us as educators:
"Commanders say that behind all the PowerPoint jokes are serious concerns that the program stifles discussion, critical thinking and thoughtful decision-making."
And this...
"Commanders say that the slides impart less information than a five-page paper can hold, and that they relieve the briefer of the need to polish writing to convey an analytic, persuasive point."
A former colleague of mine, Andy Charier had the following comment via Twitter:

"What I liked about the article was the impact it has on thought."

He also mentioned "add to that, PP creates about 10 bad speaking habits too; we teach how to create a PP but not how to effectively use them" and "it risks squeezing out the provider of process—,the rhetorician, the storyteller, the poet, the person"
All of this reminded me of an article I read over 10 years ago, called Scoring PowerPoints from Jamie McKenzie, who consulted with Edina High School Staff a few years back. McKenzie uses the term PowerPointlessness in the article, to describe how often presenters get hung up on the bells and whistles and not focusing on the content:

Powerpointing can become a goal in itself - an unfortunate example of technology being done for technology's own sake. In the best case, the presentation enhances and communicates a larger and deeper body of work and thought.

McKenzie argues that PowerPoint can by it's nature move us toward generalization of ideas and that the slides themselves can splinter the topics we are attempting to explain. He urges presenters to:
Teaching in a district with a projector in most classrooms, there may be a natural tendency to use PowerPoint as a tool to convey information. But I think this article gives us an opportunity to reflect on how we use that tool in our instruction, and explore how we might convey our course content more effectively.
So should we all throw our PowerPoint's away?
No, but perhaps we should pay attention to what Charrier calls, "the Provider of Process."
I've put together some presentation resources here to consider, including alternatives to PowerPoint.
I'll conclude with this presentation example by one of my "heroes", Dean Shareski, who recently won an International Society of Technology in Education Leadership Award. Perhaps the U.S. military would benefit from this Canadian's ideas, or at least his presentation strategies!
When you're not the smartest person
View more presentations from Dean Shareski.

Also, I don't use the animation settings much to avoid unnecessary distractions.
April 27, 2010 at 2:56 PM

DRS said…
The problem comes as we try to create as Garr Reynolds calls "slideuments". If you want to share a document, share a document. Don't let PowerPoint be used to replicate or even synthesis documents. Slides have to be visual and should supplement your ideas. Live presentations have to be seen as storytelling. If it's just information youre sharing that's done with a document.

Janet Ha said…
I thought this article sounded like crabby old people whining. The military slide/graphic organizer was an amazing piece of someone's work, and this general just dissed it because it wasn't his preferred style of receiving information.
Many of the special ed kids I work with, and MANY of their non-disabled peers are able to access far more of the curriculum material than they ever could before PP. I have seen a few of Mr. Krause's presentations and they are works of art, allowing him to teach to a broad spectrum of learners at the same time. Of course it can be overused, like any tool. Is power point making us stupider? Who is doing the measuring and with what scale?
April 28, 2010 at 7:11 AM

In a world where kids and adults are being driven towards more visual literacy (as compared to textual literacy) along comes a pretty good medium for conveying the visual (powerpoint, keynote, etc) and then we use it for textual communication.

Some of the very best presenters I've seen who use presentation software have little text and mostly are sharing images, movies, etc. with their audience.

Unknown said…
@Janet Thanks for your comment. I agree that done well, PowerPoint can be a very effective tool in the classroom, and Jeff does a great job! With any tool, it can used well, and it can be used poorly. I would be interested in how many bullet points a student sees in an average class/day/week. At what point do they all run together?
Andy's point about visual learning and the moving away from text is spot on. There are some really good ideas about this on Garr Reynold's Presentation Zen site.
April 28, 2010 at 9:42 AM