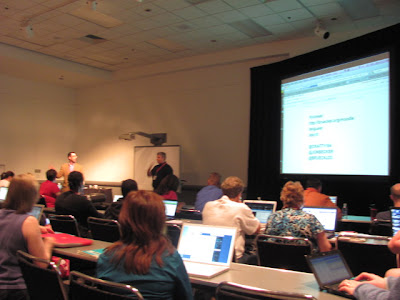 I stopped by to listen in on Chris Craft (@crafty184), Jonathan Becker(@jonbecker) and Jeremy Brueck (@brueckj23) discuss how to use Twitter more efficiently. It was interesting to see these three educators from different parts of the country collaborate and share their perspectives on how Twitter can be used effectively. I've been trying to grow things grass roots in Edina the last couple of years, as it has greatly benefited me professionally, and I was hoping to gain some insights from this ISTE Bring Your Own Laptop session.
They actually began their session last week, by inviting those registered a Google Form Survey created by Brueck to gather background information on the participants skill level and to attend a Moodle course on Twitter providing introductory lessons and a quiz. Brueck also has this Wiki site with great resources for every level of Twitter user.
They created three hashtags which formed a backchannel for the session :
#isteask for people to ask questions during the session
#istelearn for people to share information
#istelead for people to share how administrators might use Twitter.
I thought this was clever and they had the 3 tags as columns on Tweetdeck up on the screen as they presented.
Craft began by assuming that everyone there wants to use Twitter.
Then Twitter can be an effective tool for you!
He noted some important things to remember:
How do you use this tool without being overwhelmed? (This is something that a few of the people I have attempted to get on Twitter have struggled with.)
American Education Research Association Conference this spring Craft presented on some of his Twitter research. After looking at 250 self-identified educators over the course of 18 months, most of their tweets were socializing. This isn't necessarily a bad thing, but can be noise in your stream.

He follows around 400, as do I, though I have heard Will Richardson say that he prefers to follow only around 150 or so.

This is YOUR network. YOU need to Own it! Follow people smarter than you!
Follow people who can be leaders for you.

Jon Becker began by asking this question: "Is the faculty lounge valuable? How?"
One respondant from the audience said, "Depends on who's in there with you!"
Most aggreed that conversations about teaching and learning in the faculty lounge can improve your instruction.
Twitter is a nearly boundless faculty lounge for you.
Many school leaders don't have that space to talk with other educational leaders. Twitter gives them the ability to grow the list of people they can connect with, ask questions and learn from.
You can follow people that someone like Chris Lehmann, the principal of Science Leadership Academy in Philadelphia follows (in Lehmann's case that would be 2,247 people!) or if they have a list of administrators like Chris has, you can follow the entire list (Cutting the number to 63!). Another option is to use Tweepsearch or Listorious and search for the word principal.
Becker suggested that Pam Moran (@pammoran), David Dotty (@canynosdave), David Briten (@ColonelB), and John Carver (@johnccarver) are superintendents who are active on Twitter and worth following.
There are a set of standards that people in the field of Educatonal Leadership that school administrators need to aquire, such as the Interstate School Leaders Licensure Consortium's (ISLLC) Standards for School Leaders. Community Engagement is one of these standards. Becker feels that there are great possibilities for using Twitter to meet this standard. The Van Meter, Iowa School District is a great example of this with the #vanmeter hashtag. It's a great way to be transparent to your community and for you to control the message.
Brueck explained hashtags as a tool to aggregate tweets. Also, Tweetgrid can give real-time search results. (Thanks, @tollsy!)
Some districts are using Yammer, a "walled garden" approach to using Twitter, which is a social network for private social network for businesses that can still be synched to your Twitter account.
Bruek then explained how he uses Tweetdeck to manage multiple Twitter accounts and other social network feeds. He showed how he created columns for
Becker mentioned a local reporter tweeting from a school board meeting. Do you want that, or should the school control the message. He reiterated that Twitter is a great way to engage the community while also controlling the message.
Brueck shared how to click on the time date stamp in Tweetdeck to bring up the individual Tweet for when you want to share a relevant tweet with others.
Becker showed how to roll over a tweet in Tweetdeck to e-mail the tweet directly to people you want to share it with.
There was great discussion of whether to have multiple accounts or to live life in the open. B
Hootsuite is a tool that can assist people with managing multiple accounts.
This session gave me some ideas to try this coming school year to help people who might be feeling overwhelmed, and a few new tool suggestions as well.

clasigmund said…
That session sounds like it was worth the whole conference. I have ideas brimming from just your blog. Nice!
June 29, 2010 at 7:43 AM