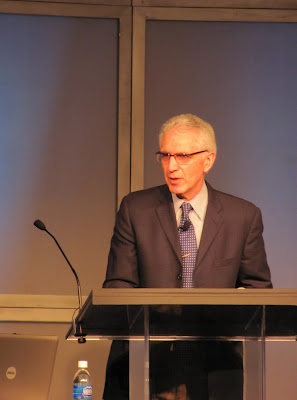 Dr. Robert Marzano, led off the second day of the TIES 2009 Conference with a keynote desscribing his research on Interactive White Boards. (IWB) His research was funded by Promethean, and they were a major sponsor of the event. That said, here were some highlights of his talk. Overall, he was less dry than what you see on the ASCD videos.
He started with a general impression of research and looking for the “Silver Bullet.” It doesnt' exist, but we may find “silver beebies!” IWB's may be one of those.
"What will revolutionize education is when we start using what we know works. "
IWB, Student Acheivement, and Engagement Marzano started by talking about Seymour Pappert and "Mindstorms." We’ve come a long way since.
Papert often asked the question, "If Rip Van Winkel had gone to sleep in 1880 and woken up in 1980 if he walked into an operating room, it would look different, but "What about a classroom?" Not so much. Marzano asked, "What would happen if Rip woke up today? Would it look different? Maybe some."
Can tech offer teachers strategies they never had, or students experiences they never had?
Read the Report at marzanoresearch.com. He then went on to discuss the numbers from the study.
Phase I
85 teachers used the board with one class and without in another. On average, use of IWB showed a 17% gain. Corrective measures would need 3655 studies showing the opposite for it to be invalid. Fairly good data.
A meta analysis of educational reform studies from Borman showed that a gain of 6%, compared with Marzano’s.
35% of effect sizes were below 0.

The effect size went up to 29% when IWB's were used 75 to 80% of the time, but down if more.
Variables taken together:
Teacher experienced
Teacher has used tech for a long time,
75% in class
“You can’t give technology to teachers and automatically expect it to improve instruction.”
Phase II.
A review of video tapes of teachers in Phase I..
Variables analyzed
Engagement
Teacher IWB skills
Student IWB skills-Not enough data
Multiple student use of IWB
Student independence of IWB
Use of IWB inforcers
Voting/response systems
IWB Reinforcers-Immediate Feedback
-Those in bold had the largest effect.

Engagement-At any time, there is always a battle between working memory and outside influence. “Great teachers don’t have students engaged all the time, but they recognize that and work to get them engaged.” What can we do to get them engaged:
Games, Inconsequential competion, pacing, humor, physical movement, manage questions and response rates, friendly controversy, opportunities for students to talk about themselves
IWB Reinforcers must focus on the content. Make sure the content is important to the learning goal.
Response Rate options
Wait time
Think pair share
Vote w/ hands
Vote w/ feet
Individual white boards
Voting technology
Type in responses-Student responses become part of the curriculum.

"In 5 to 10 years, Classroom Instruction
that works will need to be re-written. " (Why not now?)

Ned Flanders talk in the classroom quote.
Using imagery rather than text or verbal can go along way. (Then he went on to break those rules later in some of his slides)
Demonstrated an interactive site for the digestive system. (Good)
BrainPop for a 5 minute clip to demonstrate.
Called Richard Mayer the best researcher around right now. Multi-Media Learning.
People learn better from words and pictures better than words alone.
Reduce the cognitive overload. Get rid of sounds, graphics, and words that distract from the essential. Gave examples of Too Much Information!
Place keywords next to the relevant graphic. Presentation Zen would agree with this.
What does engagement look like:
The flow between Working memory….Sensory Memory…Permanent memory.
Critical Instruction Sequence

Marzano finished by asking the question about whether if you had the resources for Interactive White Boards or 1:1 laptops which would you fund?
His response: "Why not both?!"
Marzano certainly played to the crowd to an extent, and people were excited to hear him validate the potential of educational technology. Some in the audience commented on Twitter that Marzano's research was not "peer reviewed," and that "the research didn't show that IWB's were any better than just a projector in the classroom." In reflecting after the talk, I think that what Marzano was saying is that any instructional strategy, if done well, will result in student improvement. And any instructional strategy, if done poorly, will have little or negative affect (Though his data may say otherwise.)

Jon Becker said…
Marzano's "research" has been peer-reviewed, though not in conventional ways. I did a 5-part critique on my blog. The "study" is abysmal. He's going around the country speaking about data that are meaningless. Please review what I wrote. Here's the first of 5 parts:
http://edinsanity.com/2009/06/02/marzano_part1/
December 16, 2009 at 6:36 AM