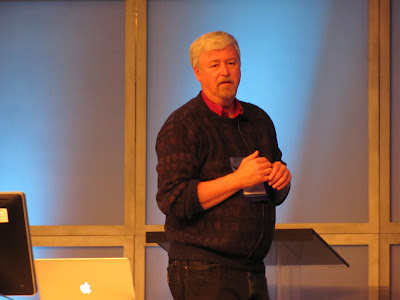 "It's all about engagement!"
Dodge started with a video on "pure engagement", a time lapse of a 9 month old in a room full of toys! Everything in the world was engaging at that point in your life. Now, fast forward a few years, and that student is in school. What happens to stifle that? (Perhaps it's because we can't manage it!)
Engagement is like a valve. No matter how many interactive white boards you have, if the valve is shut, it won't improve instruction. He asked usthe question, What Does Engagement Mean To You? Responses from the crowd included: People have choice, and are actively present, absorbed, "sponge-like", and intensity of focus.
He did an informal study with his gaming students to describe a learning experience that was fun, and another that was boring. One student described looking at artifacts from the Civil War and being asked to look at them, and share what they thought they were.
Another talked about choosing a painting and telling the story. Another talked about learning about toe-nail discoloration, and taking off shoes to explore each other's. Constructing Hurricane proof houses. Learning by doing! What would you do next if you were on Apollo 13?
Here are characteristics of what he found: 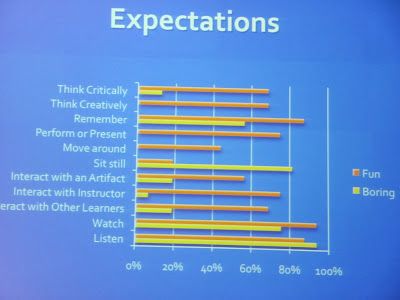 He asked students to create a video that described their favorite learning experiences. Here is an example:

When he asked students to share videos like this, out of 160 students only 2 were about a lecture!

By designing interactions between student-teacher, learner-subject matter, learner w/ other learners, and learner with themselves teachers can provide engaging environments.

How do we do this with technology? (For someone with a hammer, everything looks like a nail!)Learning Power equals Attention x Depth x Efficiency
Causes of Attention: Variability, Human Interest, Uncertainty, Challenge, Social Interaction, and Competition. We know these as experienced teachers, but sometimes forget with technology in the room.
Attention is a ratio of Time Spent Attending to the Class/Total Time in Class. He admits that students minds are going to be elsewhere some of the time.
Depth-Blooms Taxonomy-The intensity of the cognitive process.
Efficiency-Curricular Efficiency- The proportion of time students spend thinking about the curriculum vs. something else. If the tech is unfamiliar, creative or richly detailed, they may spend more time on the tech and less on the content.
So What is Engagement? It's not the technology, it's all of the interactions you create. The interaction needs to be about what you are trying to teach, using as much of the brain as possible. 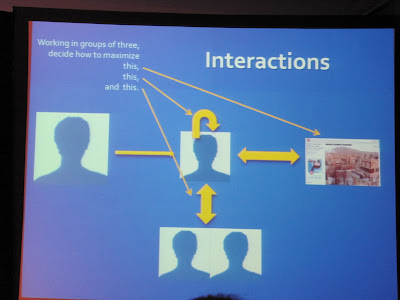 Dodge said he initially thought that Second Life would be a great tool for post secondary instruction. He found that there was too much extra baggage for curricular efficiency. They've abandoned it, for now until it's easier to use. When he developed WebQuests, the focus was on learning and making the technology disappear.
If only we had a visual language to talk about this. (Showed the San Diego State Football Playbook, A dance diagram, a figure skating routine. Since teaching is at least as complicated as football...
Focus on Interactions thin lines weak, thick lines strong.


Sana'a: View from a rooftop at sunset in Yemen