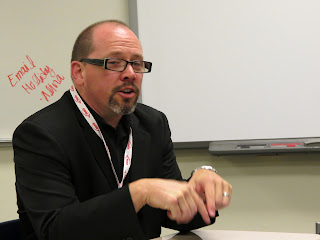 Miles MacFarlane made the trip to EdCampMSP from Winnepeg, and decided to share a session on his use of Minecraft with students.

Started when his 9 year old nephew shared Minecraft with his 8 year old son. After taking a look, he saw some great applications for his classroom!

He teaches in multiple subjects, and the first place he saw an application was math, applying equations to real world situations.
In science students can create drainage systems.
In language arts, students create dioramas simulating scenes. Plus, students can act out within the environment.
In social studies, students researched the floor plans of Greek temples, created a scale model of it in Minecraft. Students can play with lighting and texture in the system, which gives them the ability to make daytime vs. night time, they can fly around and take pictures from different perspectives.
Their last project was given a chunk of land to create their own fiefdom in the Middle Ages.

He has students play in "Sandbox Mode," where they don't have the ability to interact.
He might change to include some of that if he wanted to include actually gathering materials and raids into enemy territory.

His EduWin was when a student who had a hard time being motivated all year, asked for the hardest design to make!

A participant asked, kids in recess are playing this. "What are students doing?" They're building and exploring. Running away from Zombies!

In a closed wifi system, kids can share their worlds with others. One student hosts the game, and others can join the virtual environment and interact with it.
Miles has some great sharing on his blog about how he used it with kids. He compares it to playing Lego together, in a safe environment, with a goal.

You can also create simple machines within the system, which came in handy for the castles his students built! You can make mistakes and it's easy to fix and learn from those mistakes!

For a final project, he had students tape themselves touring through their space and narrating what they did.
Girls were harder to engage at first, but after awhile, those that started with construction paper, soon moved to Minecraft!

There is an Education plugin at Minecraftedu that allows you to see all of your students in that space. You can conduct "group meetings" that pulls all avatars together for group instruction. You can also pull people back to where they belong. You can also control terrain in much faster. This speeds up the process.
He's included additional resources in the session notes.
Miles ended by showing us Project 1845, where people are creating Bejing in 1845 using historical maps.

He hopes that some day, he can have his entire grade 8 curriculum modeled in a 3D world in Minecraft!
Carl Anderson shared at the end of the session that he has been looking at GoGoFrog.com as another option.