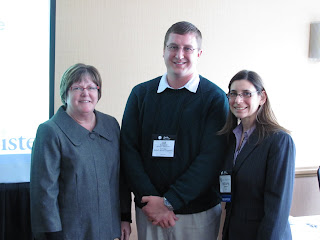 State Level
Carol McFarland, a Minnesota State Representative from White Bear Lake, Minnesota, came to share her thoughts on educational advocacy issues at the state level. Before she became a legislator, she was a parent volunteer and school board member. She reminded us that democrat or republican, you can not pigeon hole legislators, as they are all individuals. It is important to talk to both parties. Education is NOT about partisanship. She is on the Education Policy committee, and believes that there needs to be better alignment between K-12 and post secondary. What are issues regarding collaborating. Currently, cities, counties and townships do not have to go to the voters regarding expenditures. Schools do. This needs to change.
Tell your story, to ANYBODY and EVERYBODY! Engage your legislators, not just your local legislators. Contact committee members, but don't stop there! If you have individually done your work telling your story, when bills get to the floor, all will have heard it!
Build coalitions! How many know that the Minnesota Chamber of Commerce has Education as a high priority! The problem is we speak different languages. They want a return on investment, and a strong work force. The battle scars of political elections make it difficult for people to get together to work on issues, but work together they must!
Letters are more effective than e-mails, since people took the time to write, rather than copy and paste an e-mail. This is significant! Make appointments to talk with legislators. It is more effective to write a short, sweet letter to tell your story. Robo-e-mails are less effective. Sometimes students are the best advocates, but make it genuine, not prepped! "Bills are a start of a conversation!" It may not pass, but it gets the conversation going! The Minnesota Department of Education has been cut so much that it is hard for them to advocate. Many omnibus bills are voted on whether bills have more good than bad. Approach legislators with opportunities and solutions rather than just telling them to fix it. Tell your story! She shared how her granddaughter's 3rd grade teacher has received grants to integrate technology into his curriculum. Ananth Pai, the teacher happened to walk by as she spoke. He said, the best thing you can do is invite people to your classroom! TPT did an interview on what he is doing as well!
Hillary pointed out that when teachers scrape and hunt for funding, it causes a difficult issue when trying to move something to scale. As advocates, this makes things tricky, because not every teacher can do that, and there are only so many grants to go around. 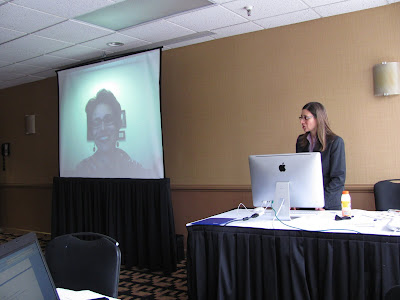 Just Show Up!
Jennifer Bergland, Director of Government Affairs for the Texas Computing Education Association Skyped in, to share how she started and what she does.
Legislation happens from those who show up! So show up! Instead of being intimidated by the process, remember that you are the expert that has information that can help legislators. The more you know them, the more they seek out you! Sign up for ETAN or other resources that push information to you!

She majored in Political Science, but she went into education because she loved kids. She worked as a Social Studies teacher, Technology Director and now the TCEA. She felt that her organizations were not doing enough to advocate for Ed Tech Funding. 7 years ago, she received funding for a Middle Level 1:1 initiative. As that project evolved, she realized the need to advocate at the state level for funding.
She worked with Tech Companies, the Texas School Board Association, and teachers organizations. She worked on a bill to allow districts to use textbook funds in a flexible way, so that they only have to buy classroom sets rather than one for each student, so that remaining funds can be used to purchase digital materials and equipment.

Advocating with Members of Congress

Joe Campbell, a member of Senator Amy Klobuchar's office who works on educational policy issues came to talk about what Senate offices are like and how they operate. They have 17 staff in the Minneapolis office, 25 in the Washington office, along with regional offices for out state. 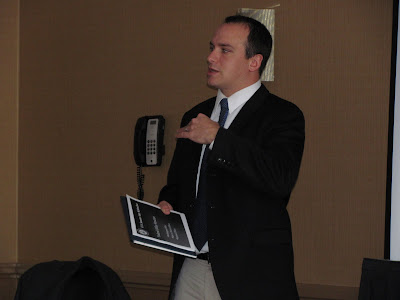 At each office, there are staff who work on specific issues.
Senator Klobuchar reads every response from her office that goes to 5 or more people.
When engaging with a legislator, it is a strategic decision. If it is something that affects a small fraction, you may want to choose a smaller pool to meet with, where if it affects more people, you may want to contact more people.
To schedule a meeting, a member of the staff are always available. Be flexible.

Assume that staff know nothing, but that the member of congress knows everything. Use that time to get into the meat and potatoes. We are the experts! Senator Klobuchar will usually ask questions. Keep it simple, and stick with the agenda. Staff will stay after to discuss further! Be ready to share "the ask!"
It's important to make the effort. The more information legislators have, the better decisions they can make! 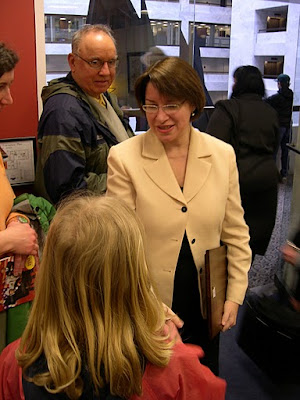 Another option is to talk with staff about issues and ask them to write "Dear Colleague" letters to advocate with other legislators to advocate and share stories that way.

Campbell stated that Senator Klobuchar is a strong advocate for investing in our national infrastructure, expanding access. Session participant, Josh Sumption, from Marshall, Minnesota discussed the issues in South West Minnesota, where at school there is great access, but at home they are still dial-up. The "school-to-home" option is a good one, but Hillary pointed out that it should happen, but not at the expense of E2T2 funding!

If you have an issue you would like to discuss with a representative from outside your district, right now, you are limited, because on the Web sites, you need to be a member of that district to contact. Campbell said that you should simply state, "I'm not from your district, but have an issue I would like to discuss with you. What is the best method?" Senator Klobuchar has also participated in video conferences from her office. She also stops in every county, every year. Given that Klobuchar is on the Commerce Committee, she may not have as much to say about ESEA reauthorization, but she will play a huge role in broadband infrastructure! Senator Franken is on the Education Committee, and will have an influence on ESEA re-authorization.

We closed the session discussing what we can do moving forward. For those that send an EdTech Advisory Network letter, Hillary would like us to send the response that we get, so that she can track responses. There are more resources on the conference Wiki if you would like more information.