Posting Student Work and How it Affects Acceptable Use Policies 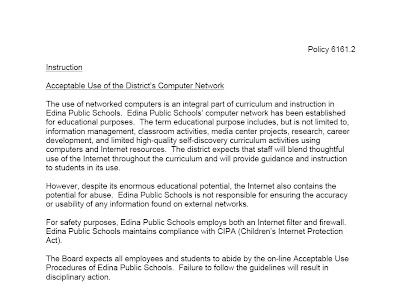 Yesterday's TIES Key Instructional Contact meeting, featured a panel discussion regarding the posting of student work and it's affect on Acceptable Use Policies.
The panel featured panel members:

The first question dealt with whether or not districts even need an AUP?
Bissonette and Haugen discussed that policies and procedures are two different things and that it was important legally for districts to cover themselves.
The question of student e-mail came up. Dronen stated that students in Stillwater have an e-mail address grades 5-12 to use on student projects. He stated that students passing notes in the analog world, now it's in the digital. Students get an address if they are working on a project for school, and they have provided a document for parents and students sign off on.

The main difference is the domain of the e-mail address is different.

Dronen said that the teacher-parent communication piece is key to any of this. Teachers being up front with parents about what they are doing in class or on their Web site goes a long way. The perception is the key!

Bissonette stated the importance of being as transparent as possible. She handed out a packet she prepared for the talk that included examples of districts that have experienced legal problems due to disciplining texting in class, Facebook postings, the blocking of certain sites,

Is student e-mail private or public? Bissonette said that the question is how students were told the e-mail would be used. The Family Educational Rights and Privacy Act relates to student privacy enacted first in 1974 requires parental consent to post information. Since the cut off is 18, after that age, parents do not have access to that information. This can pose problems for K-12 schools!

A question from the audience about student e-mail talked about the practicality of teachers being able to access it. Dronen said his directory was only accessible within the district. Teachers access to student e-mail accounts for instructional purposes should be clearly stated in the Acceptable use policy.

All of these are policies that need to be discussed and planned for.

Haugen said that schools need to be about life, if not, we are marginalized. Good policies and procedures need to be in place and then how can we engage students in the technology that is available. If we just say "no", we will lose the students.

The Children's Internet Protection Act requires districts to use filtering software, but districts may control what gets filtered. Bissonette thinks that is a good thing!

A question from the audience asked about Web 2.0 and the difference between content created outside of school versus inside of school. Dronen said that an Edjurist attorney recently commented that these tools have blurred the line between what schools can control. He advocates going slow and steady with Web 2.0 tools because whenever technology is attached to something, there is some fear.

Haugen advocates for teachers can protect themselves by communicating clearly with administrators, students and parents ahead of time. He said that we have confused kids by saying they need to be fearful of predators and not put information out about themselves, but then at school we tell them to be public!

Bissonette-The one key issue about students putting information out about themselves is student disclosure. She said there is a big difference in what you say to a 3rd grader, a 7th grader and a 12th grader.

A comment from the audience mentioned that if students do work on school computers, it is owned by the school, but at home it's yours. Dronen said there is some grey area there. Dronen has set up passwords at the 5th grade level for parents and students to get to see comments and student work. As students get older, there is some additional communication to the parent asking if they can post first and last names. This is similar to the "Walled Garden" philosophy I saw presented by Ryan Bretag and David Jakes at Educon.
Bissonette said that from a free speech standpoint, if kids are on school computers, the district can impose restrictions. If it's off campus with personal devices, if there is a threat or it impacts learning, the school can still have some say. But if a student says something the district doesn't like, but doesn't threaten, there is some serious grey area. Students are suing in these instances on free speech grounds and are winning!
What is the difference between a signed AUP document vesus a posted policy and how often should these documents be signed? Dronen suggested using a dedicated portal for parents electronically signing, though he still has parents sign the forms that are in the student handbook managed at the school level.
I submitted some questions that Ryan Bretag posted yesterday and the panel replied:
If safety is the reason for not publishing their names, is this really a means of ensuring safety or is it a false front?
Dronen asked whether the district should be filtering computers that students are bringing home? He thinks probably. He thinks that it's important to teach anonymity with students but then also having a richer dialog about how safe they really are.
If we are teaching digital citizenship, is an alias or partial disclosure the best approach?
The panel felt that age matters here.

If we are helping students develop a strong, positive footprint, is it best to use their full names?

Dronen stated that the context is important. At some point, students may want to "brand" themselves for the future. We as educators need to be open to it, as long as it's age appropriate.

Bissonette agreed with the concept of context and that there is less of an issue whether a school district discloses the information vs. the students disclose the information. She pointed out that it's important to remind kids that before they post, they really need to think about what information they want out there for "a good long time-possibly permanent?!"
How do we take into consideration professional publications treatment of students such as the athlete who has his/her full name printed next to their photo?
The panel didn't discuss this issue, but in a side conversation with Dronen and others the Minnesota High School league
There was discussion about professional development for staff on these issues and how districts were handling it.
Haugen said it was important not to scare staff, but to boil it down to the key points and make them aware. Bissonette discussed the need to remind staff about copyright and how they can utilize Creative Commons content, not just parameters but showing what they can use.

One audience member noted the importance of telling kids that when they go home, they need to credit themselves when they create content because they are outside of the fair use guidelines of school. Bissonette talked about getting permission from the copyright owners and putting students in the position of being the creator and licensing their work.
Dronen said that as Tech Coordinator, he tells his staff that they are their to serve the classroom teachers, but sometimes requests come in that would not be in the best interest of the classroom or the district!
Haugen chimed in that who should really be having this discussion today are the students!! That's what educational institutions should be about! Having rich dialog with students about the issues that are affecting them.
The key concepts I took away from this discussion were:
You can read more notes on this in the Google Doc here.

Mike Dronen said…
With regards to filtering district-owned computers that students take home - to filter or not: I think the point here is that whether a school district provides filtering for systems that go home or not, the more important [Read: absolutely necessary] task is to be educating parents and families about their child's digital life and the role that the parent/guardian plays in that area. Caution would be advised in not messaging a false sense of security with regards to student protection at home, by stating or implying to families anything close to, "No worries, it's all filtered...safe and sound!" So the key here is parent (and student) education around appropriate and wise use.
April 22, 2009 at 9:08 AM