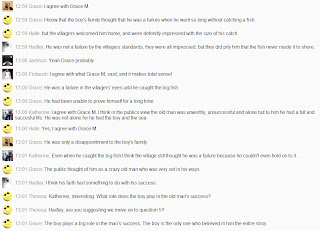 8th Grade students at South View Middle school had the chance to discuss Ernest Hemmingway's Old Man and the Sea today, but not in the traditional way. Language Arts teacher, Tess Bademann had the students chat about it using Moodle.

After organizing students into groups of 6-8 within Moodle, she had them log in, randomly dispersed throughout the room, and enter the chat room. Students were given 6 question prompts, but were encouraged to only use those as a starting point for discussion.
For the next 90 minutes, the students debated and questioned each other regarding whether the character, Santiago, is a tragic hero, the choice of title, the significance of the lions on the beach, whether Santiago was a success or failure, religious symbolism, satisfaction with the ending, and whether they saw a bit of themselves in the story. Aside from the clickity-clack of keyboards, there wasn't a sound!
This exercise allowed students who might be less likely to share in a face to face large or small group setting the opportunity to share ideas in a non-threatening way.
Students were engaged, and discussing topics at a much higher level than a typical in class discussion.
It was also an opportunity for students to practice constructed response, a component of the Minnesota Comprehensive Assessment math, science and reading tests.
During one chat session today, the following exchange took place:

12:52 Morgan: His adventurous past that we don't know much about

How often would a student ask a fellow student to "elaborate" in your classroom?!