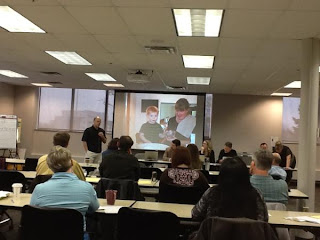 Note: These are my notes from a panel at MDE on March 30. Realized today I never got it posted ...


Mark Carlson from Edina, Mike Dronen, Wayne Feller and Kristin Daniels from Stillwater, and Chad Bray from Red Wing shared their experience of Flipped learning in the classroom.

Carlson, who has been flipping his instruction 3 years ago, started off talking about the shift from "Did I cover this?" to "Do you understand this?" He noted that it is much more work, but he has much more one on one time with students.
For some of the videos, he's on his 3rd or 4th edit, and he likes that if it isn't good, he can change it!
All of his videos are on Youtube, and he has the student complete formative quiz questions in Moodle.

Dronen, the Tech Director in Stillwater saw 4% growth in students MCAII questions after their 2 1/2 month pilot of flipped instruction. Staff told them that even if the district can't support it, they are going to make it a part of their pedagogy moving forward.

Daniels and Feller discussed their pilot that went from one teacher to 26! They have had great feedback from their staff and have incorporated Flipped PD in their pedagogy. Teachers need that guidance and feedback that has been transformative. They are using a rotating sub model to "liberate teachers in 2 hour blocks of time" to meet with them. Feller maintained a blog where he included all of the questions he received during the pilot.

Bray teaches Algebra at the High School level in Red Wing and uses Sophia.org for posting his content. He recorded 40-50 lessons last summer to complete an entire semester of lecture. For kids who do the program the way it's intended, it's better. The question of what to do with the kids who don't do their homework is still an issue. Sophia allows teachers to create "tutorials" with content and video. The sound quality on his example was less than ideal...
The key component is how he structures his classroom, in groups, working at their own pace, with more time for individual instruction. Flipping has allowed him to help kids who struggle on their homework in class as opposed to "fighting their parents at the kitchen table."

Copyright was an issue brought up from the audience. In Stillwater, they use Houghton-Mifflin Harcort who gave them permission to show a couple of examples, but anything copy protected is hidden behind password protected sites. Carlson creates questions from his course content, but it is password protected behind the Moodle password protection. He's spent a lot of time working on his videos but he realizes that they are the property of the district.

Carlson uses Camtasia Studio. He started using SchoolTube, then switched to Blip.TV and now is on YouTube due to content concerns on Blip. Stillwater uses ActiveInspire from Promethean for to produce the videos and uploads to Moodle and PodcastProducer. They are purchasing screencasting software to improve student engagement in the lessons. They are using ScreenFlow. Feller noted that it's more about the pedagogy than the specific software. Also, some staff are better for different roles, such as creating the content, managing Moodle, or recording the video. They like to keep their videos under 30-40 mb. Bray uses the audio enhancement in his classroom along with his SMART board to create his videos.

Feller-AUDIO rules! Use an external microphone!
Dronen noted that 17% of the students needed a DVD to view the videos. Now it's down to 10%.
Equity includes both students being able to access, but also staff professional development and support. Feller noted that the differentiation possible in the classroom with flipped addresses many equity issues! Bray has a standing rule that students can watch videos in their "Center for Information" at the start of class, and then they can come to the classroom. Flexibility is important.

Push-Back
When Carlson started, the initial reaction was extremely positive. Most parents who aren't happy have students who were very successful in the old model. Overall, it's been fairly positive. He works very closely with his 9th grade counterpart, Kim Griffiths and so they share making the videos. Staff at lower levels are coming on board as well.
During "back to school night," Feller and Daniels were available to answer questions from parents in classrooms who were going to be involved. Most parents were ok, but there is some pushback from students who are used to "playing school," and now are being asked to actually think and learn! Face to face parent meetings with all classrooms looking to flip has been very beneficial. Feller records these, and transcribes to answer all questions, and those people are now some of the biggest allies. Bray has very little negative feedback.

Length
7-10 minutes in Elementary and after 15, kids at the secondary level tend to tune out.
Transcripts of the lessons for students or captions. Daniels noted that you can upload a script on Youtube. An audience member suggested Webaim.org as a good site for meeting ADA guidlelines.

To Khan or Not to Khan, That Is the Question...
Bray decided he wanted his voice there and he didn't want to "take the easy way out" using Khan Academy Videos.
Feller noted the better quality of the videos produced by their staff, with their teacher's faces, focused exactly on the specific content the district uses is much better in the long run.
Carlson noted that the students want to hear his voice.

Does PD for Flipped look different for Secondary vs. Elementary
Stillwater's Flipped PD model offers staff the whole range of options. Dronen noted that English was the original flipped model, as students had to read the text in order to discuss it in class.
Technology, Coaching, and Community: Power Partners for Improved Professional Development in Primary and Secondary Education., a new White Paper from ISTE was mentioned by Daniels as a model that is important to look at.

Carlson is now 100% summative on his assessment. He uses three levels of tests. Level 1 is the district Power Standards. They must pass it at the 100% level. Level 2 is the next level up, then the hard questions that rarely get to get asked are the top level. Level 3 is higher level thinking. Flipped has given him the time to do that. He tries to keep himself a quarter ahead in regards to the videos. He was worried early on that kids would try to go through his whole year course in one semester. Thankfully, that hasn't happened.

Feller notes, it's all about RELATIONSHIP! The face to face time provides us the time and opportunity to learn about student passions and connect with the students.